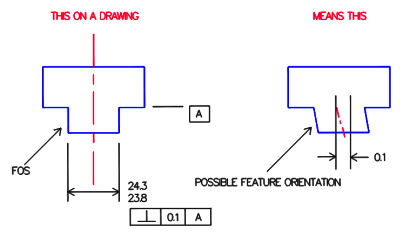 In the left figure above, the boxed perpendicularity symbol and tolerance are used to control the center axis of a male feature.  The boxed symbols can be read “This axis must lie between two planes perpendicular to the surface at A and spaced 0.1 apart”.

The tolerance zone created is indicated by the parallel lines in the rightmost figure, and  applies for the entire length of the axis extending from datum plane A. Note that this example only controls the orientation in the plane drawn. The other plane (perpendicular to the above drawing) is unaffected by this orientation control.